Trampolines: How to Tell Your Kids No 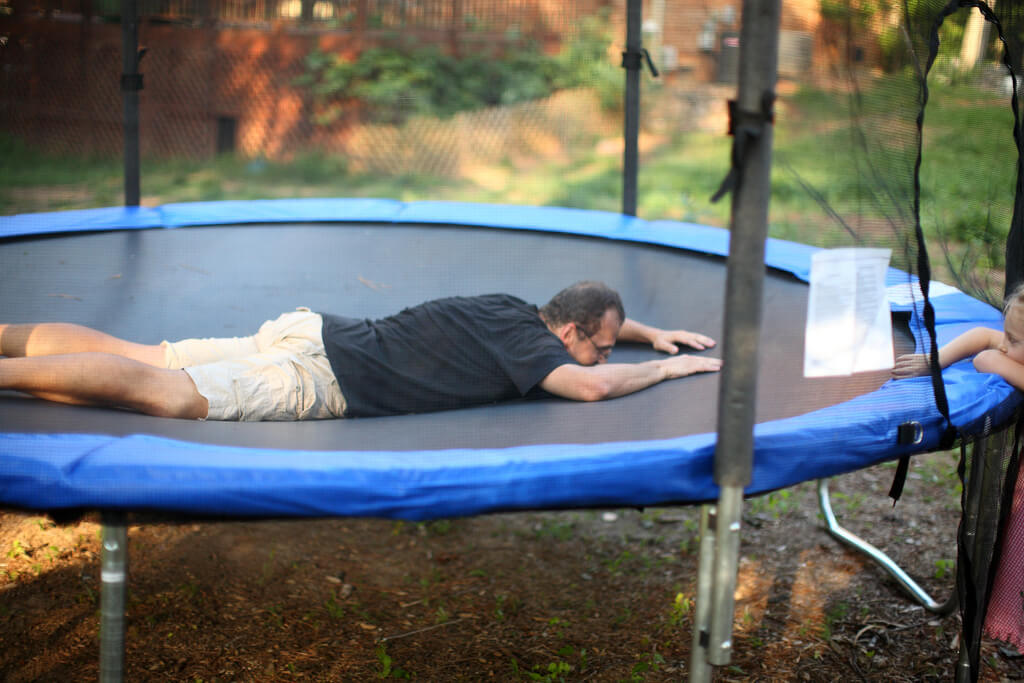 Parents, doctors, and insurers are against them, but every kid out there wants a trampoline. Of course, you should not get one, but if your kid is old enough to listen to reason, then it’s a good idea to quote some stats instead of just using my argument: “Somebody always gets hurt on a trampoline.” While true, it’s vague, and kids who like to argue want more than vague parental conclusions and absolutes.

If you have been hurt on a trampoline, tell your kids about it. Ask other parents. Every parent knows someone who has been injured on one. They might make excuses, like it was before sidewalls or that some other parent let too many kids jump at once. The fact you can give your kid is that we all know someone who has gotten hurt jumping. And it’s not just the kids, since I have known two women in their 40s who have had legs broken (and really bad breaks) from landing wrong. Don’t fall into the trap that if you get it for the kids you’ll be able to do your own workout on it. You’re not sixteen anymore, even if you still look good in a short skirt. No one looks good in a cast.

The American Academy of Pediatrics has said no to trampolines. Doctors will tell you plenty of horror stories if you ask, so if you want medical confirmation, ask at the next yearly checkup. I know, kids are lazy, and doctors want them to workout, so if a trampoline gets them moving, it can’t be all bad. Being laid up for six weeks waiting for a broken bone to heal is a huge weight gain waiting to happen. Just figure out some other activities that get the kids moving. Maybe take them to the trampoline park a few times a year to relieve the stress.

I don’t love insurance companies, but the goal is to make money. These companies realize that making money is more difficult when they have to deal with huge payouts related to trampoline ownership. On one website that represented ten homeowners insurance companies, only one of those companies allowed trampolines. That means you’d likely have to change your insurer or lie about owning the trampoline. And since someone always gets hurt, you better hope it’s not your neighbor kids. That means hoping it’s your own kids, and there’s something wrong with that mindset.

It’s not clear just how many homes have trampolines in America. Maybe 500,000 are sold every year, but how long do they last? How many dads take them down for the winter and don’t bother to put them back up? How many store them after an injury? Even if we said that most people who bought the devices left them up for 10 years, then there would be 5,000,000 of these out there to account for the 1,000,000 visits to the ER over that time. In one single year of sales vs emergency room visits, it was 500,000 sold to 110,000 incidents. Pretty consistent. It kind of leads me to assume that 500,000 trampolines are decommissioned each year. If that’s the case, I’d say you have a 1 in 5 chance of ending up with your own or a neighbor’s kid at the hospital because of your trampoline. Add to that the number of older kids, adults, and even little ones who don’t want to tell anyone about a more minor injury. Like my old football injuries that stayed on the field, these might not get you to the doctor’s office, but they might creep up later in life. For example, in just the past year, both our neighbors and a friend have had kids sustain injuries on trampolines that led to rule changes and calls to doctors but not official broken bones or concussions. If we assume that happens about half the time, then the chances of someone getting injured on your trampoline increase to 2 in 5. Keep in mind, this is per trampoline, not per kid. I’d assume the average trampoline has over five users in a year, so that would change your own child’s chance of getting hurt closer to a mere 10%.

Let’s compare to bikes. Rounding some stats from a couple decades ago, 30,000,000 kids rode bikes per year, and 600,000 kids went to the hospital for injuries. I read in one resource that riding animals and bikes are the worst activities for kids, but I’d put trampolining right up there. The problem is that we can’t limit our kids completely. They will ride bikes, go swimming, climb trees, and whatnot. What we can do is make the right decision on what we encourage them to do. You wouldn’t tell your two year-old to climb up on the kitchen counter to reach the glasses. You wouldn’t tell your twelve year-old to make new friends on social media. You wouldn’t tell your high schooler to date a loser just to live and learn. Why would you tell those same kids to go out and jump on the trampoline?