Details
Written by Brian Jaeger
Category: Being a Role Model
Published: 05 May 2018 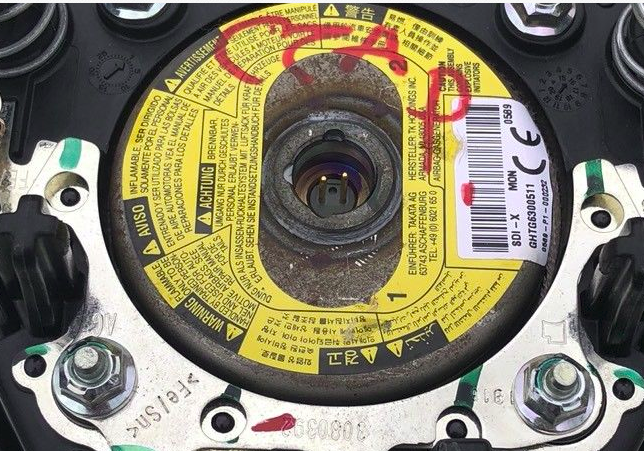 This is really unbelievable to me. Takata airbag inflators are not only NOT being recalled until they kill someone, they are also still being installed (or re-installed after deployment) in new cars. There's not a whole lot of information on this issue, which is really strange. Everyone wants to know if their own car is being recalled, but what people should really be asking is whether or not their vehicles have a Takata airbag at all. When you get the car fixed, what's being put in those vehicles? A Cars.com article from 2016 showed that some manufacturers had stopped using certain Takata inflators, but the article went on to show that most of those companies were just using a different version of the Takata killers.

In the article, GM said it wasn't installing recalled inflators, but that's just because the recall hasn't happened on those particular devices yet. And other manufacturers were still using the same explosive chemical in the airbags, just with a stabilizing compound. That might make the airbags less likely to kill passengers within ten years, but who's to say what happens in fifteen years? Is it really acceptable to keep installing these? No, it's not, but without anyone even knowing which new vehicles have Takata components, it gets confusing and frustrating.

I couldn't believe that a recall that should have begun over a decade ago was suddenly including 2017 models. That led me to wonder which vehicles have finally moved to something better than Takata, and I couldn't find them. Is there an endless supply of Takata inflators in auto industry CEOs basements? Probably, since there are all kinds of related skeletons in their closets.

I sent a message to Chevrolet asking about new 2018 vehicles. I assume I will not hear back, or that I'll be told the NHSTA has not said there's a problem with the airbags. Not yet. But will anyone admit that the airbag units have Takata components? Maybe not, but I did find a way of finding out at least some information about the cars using Takata airbag inflators. It wasn't listed in the safety ratings. It's not on the GM website. It's not in any article I could find online. But do you know where you can get at least some idea about the airbag in your car? Not the New York Times or Fox News. Not the federal government or manufacturers. It's on Ebay!

That's right, Ebay. If you want to buy an airbag, that's the place to go for parted-out cars or stolen goods. You can take a look at the models that use the airbag. You can also zoom in on the photos of the airbag. Look really close, and you'll see it. Under the hand-written red P. It says:

That's a phone number in Germany, so you can call and ask if one of these is in your car, too. This is a part that is claimed to fit in 2016-18 Chevy Cruze vehicles. That's what I was looking at purchasing.

It's totally possible that this is a photo of a 2016 airbag and that GM developed a soul since then, but that would lead to the problem that people might be replacing non-Takata inflators with Takatas, and that could be dangerous, too. It's also possible that the newer version of the Takata inflators will be safe for the long haul, but I'm not buying it. Literally. Unless I get word from GM or any other manufacturer that another airbag system is being used, it's just not worth the worry.

My advice is to try to find out if a car you're buying (new or used) is on the recall list, but I'd also try to find out just what kind of airbag is in the car. I am pretty sure that every car with a Takata inflator will eventually be recalled. You don't want to be the statistic that leads to the recall.

The Chevrolet Marketing Team sealed the deal with this response when I asked if the company still uses Takata airbags:

You know what, Chevy? I have $20,000 in proprietary money that's not coming your way. I am not a spy from Ford. I don't think spies from Ford care if GM is still using killer airbags.And if Ford wanted to know, they could just buy an airbag off Ebay! EVERY SINGLE CONSUMER should care. If you're looking to buy a car right now, next year, or whenever, contact the auto manufacturers in order to find out if you can expect an exploding airbag or not. Hint: if it's a Takata, you can; if they won't tell you anything, it's a Takata. My guess is that this is not only the biggest recall ever, but it will continue to grow, eventually recalling recalled vehicles. And my guess is that as it goes on, and more people die, we'll eventually find out about who knew, who lied, and who said the information was proprietary.