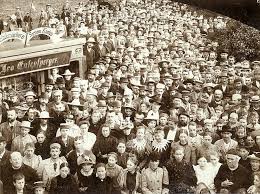 It was a disappointing day to be an author, as I was forced to unfollow about half my Twitter list. The only reason I am using Twitter is (just like the other authors) to promote myself, so I don’t begrudge anyone that social media right. However, the reason I unfollowed is because I was following self-obsessed smoke and mirrors, not a community of people interested in helping one another.

The background is simple. I joined a group on Twitter made up of authors. At the time, I was following no one and had no followers, so it's a pretty legitimate result you'll read here. The instructions were to follow everyone on the list and they would follow back. It worked fairly well, and it seemed that I was able to get more hits from my postings. The person who runs the website from whence the pyramid-ish scheme emerged was retweeting and helping out, like he promised. All seemed pretty good, and then I saw on a follower’s profile something about people unfollowing him, like he’d block them or whatever. I was thinking, that’s pretty harsh. But then I looked again at my list, with about twice as many people I was following than followers.

As I investigated my list, I saw plenty of self-help gurus and general online advertisers who’d probably joined the list in order to get clients. Those were easy unfollows. It was the authors that bothered me, though, happily basking in the glory of tons of new followers using the scheme set up to help each other, but never returning the favor. I even have to see one of these ego-maniacs with daily posts on the very # set up to help all of us, and I always assumed he was following me, too. Nope. Even more difficult was the task of unfollowing authors who had super-hot profile photos, but I brought myself to do the deed.

I wondered if those authors followed me back initially and then unfollowed in order to keep their reading lighter, but I don’t think there’s a way to tell. I also wondered if maybe they saw my posts and had some self-doubt about their own abilities. Then again, I figure they never read any of my posts, anyhow, since it was all about themselves from the start. Bringing me back to the original reason I joined, being that it was all about myself, too. Tricky, I know.

Here’s where I’m at, anyhow: I will delete those who don’t follow me back and I will try to favorite or retweet or read what those who are left have to say. Maybe I post four times a week and read someone else once a week. It’s still better than having to see posts from some clown who only participated in the scheme in order get me to read his rants. Anyhow, if you also participated in a similar way to find people of like minds, be sure to sift through that list and prune it a bit. That is, unless you were that kid in middle school who always totally wanted to be one of the popular kids so much that you followed them around like a puppy. Then I can’t help you.

Oh, and if you are an author who would like to follow me, I follow people back if they have similar interests and have that on their profiles.