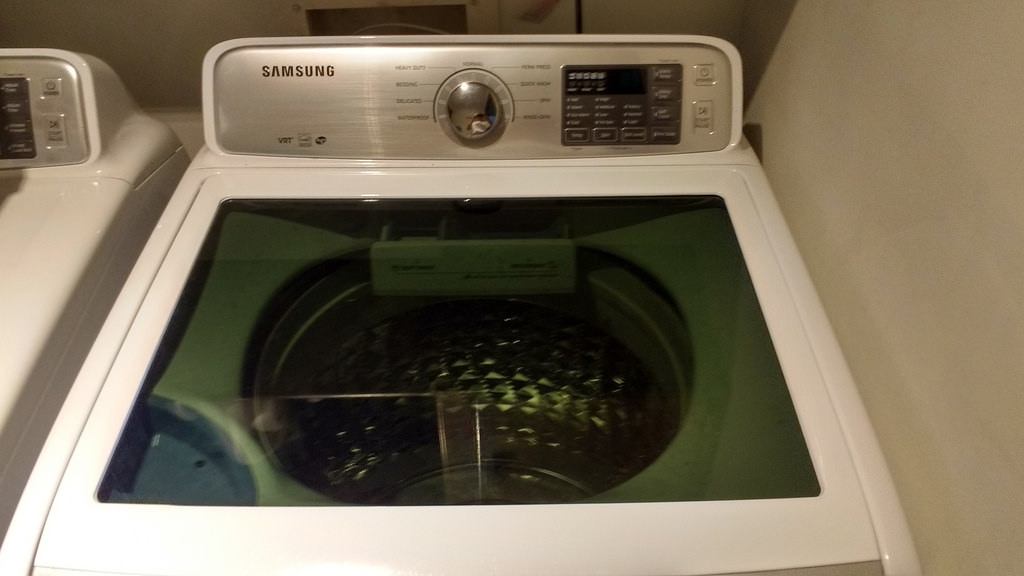 A washer is a big purchase, and when you make it, you hope that you get a decade or more of service from the investment. Our most recent washing machine was recalled less than six months after we bought it, and here’s why our new purchase is a Maytag instead of one of the brands we’ve had in the past. Since I consider myself to be a responsible consumer, I will be avoiding Samsung, LG, and other past brands in order to see if a new brand can finally satisfy our laundry needs.

Our Samsung was recalled in November of 2016 because the top loading model is prone to falling apart while spinning. It sounded like something out of a goofball robot movie. We were sent a kit to change the dial settings in order to reflect the fact that heavy loads at high spin rates will cause a dangerous situation. The fix is to change the Bedding cycle to Jeans. Bedding must be done in the Waterproof cycle, which is now Waterproof/Bedding. Which means it probably won’t get clean. Keep in mind that Lisa loves to wash bedding, and we got the mega-sized washer in order to do just that.

The options offered by Samsung included having a technician come out and monkey with the unit or take cash towards a new machine. Since our top loader was less than a year old, we were getting about $450 towards a new washing machine. $525 if we went with Samsung, which I really wanted to try to do. Then I thought better of it. I also read several accounts of people being disappointed in the repair, so I knew I would be getting a new washer.

A final note about the recall is that I knew nothing about it until 1-18-2017. That’s about two months after it was issued. With Lisa doing one or two loads of bedding per week, we had plenty of opportunities to get mangled during a violent spin cycle. Needless to say, I was not happy about the lag in finally admitting to a problem and then finally issuing materials to those who don’t peruse recall files weekly.

I bought my Samsung from Nebraska Furniture Mart. While it's not NFM’s fault that the washing machine was recalled, I did express my disappointment (to a salesman) that neither manufacturer nor retailer had contacted me in two months, since I am sure I am in a database with Nebraska Furniture Mart as well as with Samsung. I am sure the salesman will take my concerns directly to Warren Buffett.

I was disappointed that the salesman seemed proud to inform me that NFM shipped washers back to Samsung immediately, yet balked at my criticism of not contacting customers and my suggestion that a pedestal should be free. It's kind of a problem that retailers don't feel responsible for the welfare of past customers in addition to future ones. That said, I was happy to get free shipping and haul-away. I kind of wanted to tell NFM to shove it, but I also needed keep spending down, as this was our second new washer in the past year. Nebraska Furniture Mart simply had the best price on a washer I wanted.

I thought about getting a highly-rate LG washer. The problem is that about 10 years ago, I bought an LG washer that has smelled bad ever since. The clothes were clean, bit the monthly maintenance to avoid a moldy smell in the basement was a real extra chore. Even though we had problems with our LG front-loader, we decided on another front-loading device because the clothes were clean. Our highly-rated top-loading He Samsung simply did not clean our clothes as well. Not that we smelled bad, exactly. But it never washed off the deodorant scent from my shirts, making me think the half-wet and half-dry loads were probably only half clean.

The main reason we avoided another LG was because of another recall of sorts. Our old machine was part of a class action that got owners $35 cash or $100 towards a new machine. Unfortunately, I was never told about the lawsuit, and I discovered it only while researching for a new washer, four months too late to join in. I guess I can be happy some lawyer got my cut, but it just didn't make me excited about another LG.

Supposedly, my new Maytag is made in the USA. Ohio, I guess. I've normally tried to support that option with auto purchases, so I should do the same with washing machines, I think. Not that I believe we'll get huge tariffs that will drive the LGs and Samsungs out of the market, but if that was a possibility, I could see getting one serviced to be a challenge a decade from now. According to Consumer Reports, my Maytag will have nearly twice the chance of failure over a Samsung or LG. And both of those failed me, so we’ll see what happens.

Lisa asked whether or not the new washer will match the dryer we are now stuck with. Not really. Then again, I said, we can just wait until Samsung has to recall the dryer. Actually, I have to say the dryer is working fine. I do have to move it to the other side of the laundry area in order to accommodate the stand for the washer, but I got the hole saw to take care of that today. Here’s another tip that might help someone out there: small 1970s main-level laundry rooms are not made for tall, deep front-loading washing machines. Ours will not fit in the washer slot because it’s too high with the laundry chute, so I have to stick it where the dryer goes. And its depth will mean the door will barely swing past the washer, meaning the coat hangers and shoe rack I added to the walkway might be compromised. All in all, it’s been a hassle.