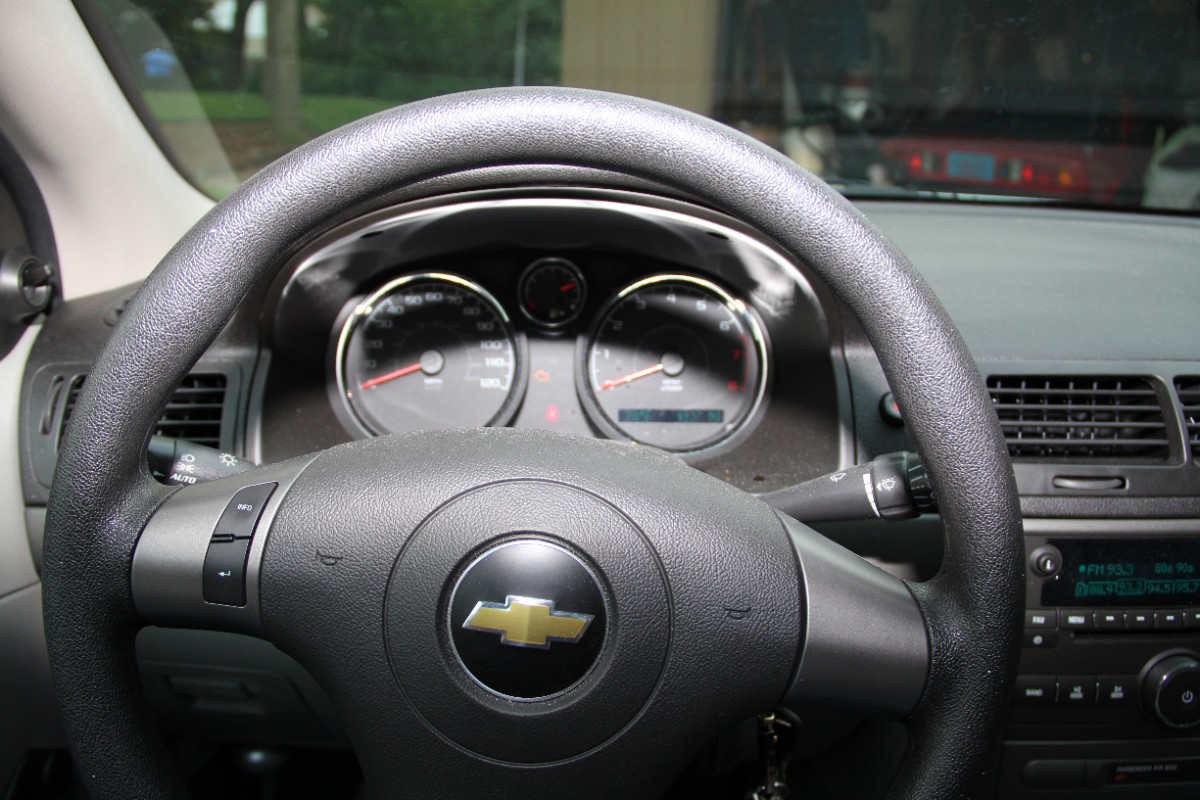 Have you ever read a book that, at the end of it, you wanted to throw the book through the window? It’s happened to me twice now: once with George Eliot’s The Mill on the Floss and a second time with Killer Airbags by Jerry Cox. What’s odd is that one of these two books, I believe, should be required reading at all high schools in America, and it’s not the George Eliot classic. My college professor, who was also a Presbyrterian minister, said that The Mill on the Floss was about fatalism or some such nonsense. It was this frustrating love story that ends with the heroine never getting the right guy, finally making amends with her brother, and then drowning with him on the river. 900 pages for that? Really, don’t bother reading it, and I even ruined the ending so that you don’t.

Killer Airbags pissed me off nearly as much as The Mill on the Floss, and it’s for some of the same reasons, though you should read it. Kind of the fatalism idea, I suppose, but at least a story about our own lives. We are all fated to be abused by corporations and the leeches who work for them. This book focuses on the auto industry, law, and safety, which probably makes it terribly boring to most people. But if you read the whole book, you’ll see that Killer Airbags refers to not only the Takata airbags installed in millions of vehicles, but also to the people responsible: the executives, lawyers, politicians, engineers, and even general labor. This includes, to varying degrees, the auto manufacturers, the airbag creators, the dealerships, all levels of government, the insurance companies, and even your local mechanic. Cox goes out of his way to document and repeat the names of the people who brought you and then defended the Takata airbags that could one day maim, slice, or even decapitate you. He adds some other recalls along the way in order to reiterate his point that what happened with Takata is the rule rather than the exception.

Cox likes to point out which Ivy League law school everyone attended, which I initially thought was odd or even hoity-toity, but I started to see why that also mattered. Important people with years of education are paid more money than you’ll ever see to figure out ways for companies involved in the auto industry to avoid responsibility when something goes wrong. It’s like those big corporations that pay more money to tax attorneys than in actual taxes, but this is about assigning a cost-valuation to human life.

Actually, a lot of those same people start out working for the government in trying to hold auto manufacturers accountable, but these people who work for us while with the government often end up working against us for a huge payday later on. Cox calls it a revolving door, and he was even brought in himself as a consultant to Takata, though his truth squad idea wasn’t what the company was looking for. If it had been, he might well have saved the company, but the owner wanted to keep hiding and lying and letting people die in order to keep making money.

What makes Killer Airbags such an awful book is that there are no heroes. Sure, Mr. Cox made an effort and wrote the book, but he’s not even really the main character. Ralph Nader, Senator Danforth, and Elizabeth Dole play well, but they are only minor characters, as well. Basically, everyone else is either a victim or a villain. There’s repetition in naming the victims as well as the villains, and I think that was the right choice. It’s the result the auto industry tried to avoid with early settlements that included silence as a condition. The imagery of what happened to the victims is unsettling, and it sticks with a reader, even if the stories aren’t in depth. It’s like when my mom made me look at a Reader’s Digest magazine she’d saved for 20+ years so that she could show it to me before I got my license. It was a magazine full of photos of dead people in and out of cars who hadn’t worn seat belts or had been driving too fast. It worked, and I always wore a seat belt, which might have saved my life at age 17 in a head-on collision, back before airbags.

My accident wasn’t before airbags at all, as Cox details in the book. It was in the early 1990s, nearly twenty years AFTER GM had shown (without wanting to) how well airbags could work but still refused to install them in the crappy Chevy Corsica my friend was driving. Isn’t that crazy? My friends and I were probably the exception to the rule because we were three teenagers all wearing our seatbelts and all surviving a head-on collision, but the technology that could have ensured our further safety had been available for two decades. Granted, as Cox affirms, airbags did kill people even before Takata, especially small people in passenger seats. That’s the “taking one for the team” aspect of airbags. Save thousands of lives and a few small (in stature) people get killed. Just like a few people might drown when they (or a rescuer) can’t unbuckle a seatbelt in time. Even the lane-keeping feature on my current vehicle could potentially pull me back towards danger after keeping me out of it on other occasions. Generally, however, we expect safety features to help most of us most of the time.

The Takata airbags, however, had a DESIGN flaw related to the explosive used and its packaging. Takata tried to relegate the flaw to MANUFACTURING, which means you can just identify some mistakes that were made on certain dates at certain plants. But that’s certainly not the case, and even the new, replacement canisters that are supposed to work better have not been shown to do so, meaning that car you own that’s already been recalled will get recalled again. And you have to hope the next recall is a permanent fix, or else it will happen again after that, until the car is safely in a junkyard. Actually, even then, someone will pull your old airbag out of the junked car and sell it to an auto repair shop, maybe installing it in a used car you buy for your kid five years from now.

The basic idea is that these Takata airbags are defective and dangerous, and a lot of people knew about it for a long time, but very little has been done. As cars age, people tend to take them in for recalls less, but that’s disastrous in this case. It’s not like bad tires that will eventually get replaced even if they were flawed. I owned an ‘84 Mercedes back in 2004, and I expected that the airbag it claimed to have would still work in an accident (or not work yet still not kill me), but if your child buys a 2004 Honda in 2024, you might have more to worry about. Were the original airbags replaced? Were the replacement airbags replaced? Was the passenger airbag replaced? Will Honda be able to find me when the next replacements are ready? And the ones after that?

Part of the reason Killer Airbags is so depressing is that the problem isn’t fixed, even though Mr. Cox outlines how it occurred and how it could be fixed. Takata lost in court, barely got punished, and then moved on to be nothing more than another bankrupt company with no money to pay for the problems it created, with all of the executives insulated from personal culpability. A Takata lawyer was even appointed to lead one of the government agencies responsible for transportation, showing how the revolving door can lead in both directions.

I don’t know what’s next, and that’s maybe where the book does disappoint a bit. Cox gives advice on how to make sure your car is safe, but he kind of leaves it at that, saying that it's really up to each of us. I wanted a list of every vehicle equipped with a faulty (or not) Takata airbag using ammonium nitrate as the propellant. When I called and emailed Chevrolet a few years back to ask if its new cars still used Takatas, the company refused to tell me, but someone, somewhere must know which cars have these airbags. While I totally agree with Cox that cars should not be allowed to be registered in a state without all recalls satisfied, I guess I would have liked a way for me to help make that happen, since it’s probably been fought against by those in the auto industry that might lose out on money, (and not just the automakers). As a collective, we have a bigger stake in making this change, and I want to know how to make it come about. And lastly, I was disappointed in the book because Jerry Cox didn’t say he was willing to take a job as the transportation secretary or head of the NHTSA, wherever he can make the most difference (or name someone who might do it right). Since I’m sure Joe Biden will probably read this article, let me nominate Jerry Cox for whatever job puts him in a position to reform/run government oversight of the automotive industry. What the job needs is someone who has proven himself to be an honest man (or woman), not someone who has proven able to get away with cheating in order to win. An astute watchdog rather than an old chocolate Lab that just wants to roll over and play dead for treats. An Ivy League lawyer with ethics. That probably limits the applicants significantly, so I hope that someone like Jerry ends up in charge of protecting us from potentially dangerous vehicles because he’s passionate about saving lives rather than saving/making money. (Also, I’d love to have a job getting Ivy League lawyers coffee in DC, so just keep that in mind, Uncle Joe.)

As Americans, we need to thank people like Ralph Nader and Jerry Cox for at least making it difficult for automakers to take advantage of us. I just paid $35,000 for a new vehicle, and I don’t even know if it has a Takata airbag that could kill me (because it’s not on the current recall list, not because it doesn’t have one--I just don't know). My 2011 GM vehicle probably has a Takata airbag that will get recalled once the first victim driving a similar vehicle gets maimed, even though GM says certain Takata airbags are somehow safer than others. New or used; $5,000, $35,000, or $150,000, consumers deserve to know about recalls but also about potentially dangerous parts, but we continue to trust the industry to self-report problems, which doesn’t work so well. We need cars and we need strong corporations, but I get angry when those companies put a price tag on my family. No amount of money is worth the life of a loved one, and we should all agree on that. Anyhow, if you want to see a clear picture of how everything I’ve rambled about works, then read the book. Make your kid or corporate-loving in-laws read the book. Send one to your local politician or mortician. Blog about it. Do something, which is more than these companies expect.