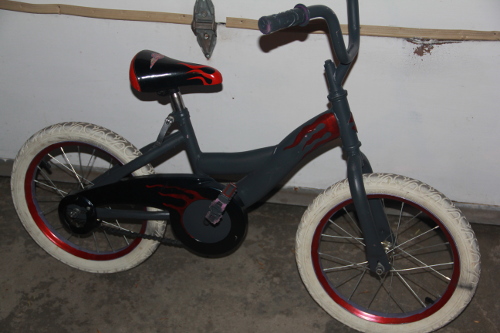 I like to reduce and reuse whenever possible. Sometimes, I’d rather list an item on Craigslist and take what I can get, but a lot of time I just know it’s not worth the effort. That’s when spray paint might make a difference, which is what happened when James needed a bike for this summer.

Actually, James has a bike, which we bought last summer, but he’s not growing too fast, and the big blue bike was just a bit too much for him to handle, even with training wheels. Helena’s princess bike was getting too small for her. Therefore, we made a switch: Helena would get Big Blue and James would get the pink Disney Princess bike. Hold on, that’s not gender-appropriate. Instead of selling the pink bike for $5 and trying to find a boy version for the same price, I just went to work with the available  spray paint I already owned and gave the princesses a bit of a makeover. The seat had been thrown out by a neighbor with a Harley Davidson bike, but the rest was done with paint. I painted the frame in a dark gray, the chain cover in a bluish black. I then used some red touch up paint in order to add some flames that matched the ones on the seat. I also had to paint the rims red in order to cover the purple.

Sure, some of the paint has already scraped off, since James falls off a few times a day right now, but I can just repaint the scratch, unlike when it was custom Disney colors. If he wants bigger flames, so be it. If he wants it neon green, I’ve got that covered, too. Honestly, I’d say that if I had all the time in the world, I’d cruise the rummage circuit. If I had all the money, I’d just buy both kids new bikes every year. Since I have neither, a couple of hours with a few cans of paint worked well enough.