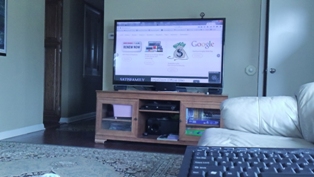 I just got done reading the Wall Street Journal Weekend edition that’s part of our Milwaukee Journal Sentinel Sunday paper. Apparently, they let the weekend staff write the articles, since I saw the worst advice ever when it comes to combining a television and computer to save space. It even had a graphic, so it’s not like it was some guy on a couch writing it. However, if you want to know the best DIY way to create a computer/television, read this article instead, since I have that setup.

First, televisions and monitors are pretty much the same thing today. With that in mind, I have no idea why someone would advise anyone ever getting another monitor. Yes, gamerboy, I’m sure there’s something going on in the monitor version that makes the earth tremble as you blast away at fake enemies, but for most of us, most of the time, it should be a no-brainer. However, probably 1,000,000 people will read the article telling people to go get 32” computer monitors instead of 60” televisions for the same price. Maybe the writer has a deal with monitor producers. I shopped for a huge monitor to display a constant powerpoint in my classroom as a teacher. I ended up with a 42” television there for a lot less than a monitor, and I ended up using the TV when the bulb burned out in my projector.

So, let’s get started with the setup you want in your living room. Big TV first of all. Mine is 60”, which is good at about 15 feet for watching television, but maybe a little small for computer time. There are online tools that will give you advice, and gravitate towards the biggest screen for the distance if you want it to work well as a computer.

Next, make sure the TV has a receiver for local channels. Again, no-brainer, right? If you’re doing this to save money on bills, get a TV that gets free local broadcasts. I get around 30 channels for free. The article I read suggested getting Amazon TV or Google TV or whatever, which just takes stuff you can subscribe to using Netflix and other services and streams them for you. This makes no sense if you are hooked up to a computer already. I have a blu ray player that can do some of that stuff, and some televisions (smart TVs) can, as well, but if the point is to create a television out of your computer screen, then use the computer to get streaming video. Don’t forget to hook an antenna to the television. This might seem too 20th century to you, but it actually works. Some people will take it a step further and can use their computers as DVRs to record those local broadcasts, but I’ll keep it fairly basic here.

Now you’re going to want to connect the computer. Do not, as the article I read suggests, move the television around from your office desk to your TV stand. You’d have to be on drugs to want to do such a thing all the time, and those drugs will make you drop the $1000 investment. Find a location that works best as a TV. You can always move a TV tray in as a desk, though I DO just sit on the couch and work. My computer is hooked up to the TV from the basement via 20’ HDMI. We have an old CRT monitor down there so that someone could be watching broadcast TV or a DVD while someone else still plays on the computer. New computers should have an HDMI display out, and all new TVs are good with HDMI. The reason this is good is that the sound comes through alongside the HD picture. Then, you can hook the TV sound out through to your stereo (or the other way around if you have an expensive HDMI stereo). Either way, you get excellent sound out of your computer, or just regular TV speaker sound, but you don’t need to go and buy a gaming speaker system.

You’re also going to want to run a usb extension from the computer to the TV. I have a 4 usb hub, and I have a wireless mouse, wireless keyboard, and a cam/mic for Skype hooked up. Depending on the length of cable, this could strain how much power travels to where you need it, but I am generally able to use my no-name (Hip Street) wireless keyboard from 15’ away. The mouse is good for about 20’. The camera and mic pick us up pretty well from 15’, as well. All this stuff is hooked up behind the TV, and the wires run to the basement and to the computer. If your office is the room on the other side of the living room wall, double awesome.

The settings might be slightly tricky as to whether you want an extended desktop or just a clone (which I use), and the clone will be stretched kind of funny on the old CRT monitor because you’ll want to optimize for the HDTV. You’ll also have to adjust the sound each time you switch from one room to the next, since Windows doesn’t have an integrated solution. These are not big issues. Not when you have a 60” television that plays local TV for free, all of your own media and Youtube content for free, and then streams whatever other providers you order, without having to watch it all one some eye-straining tablet.