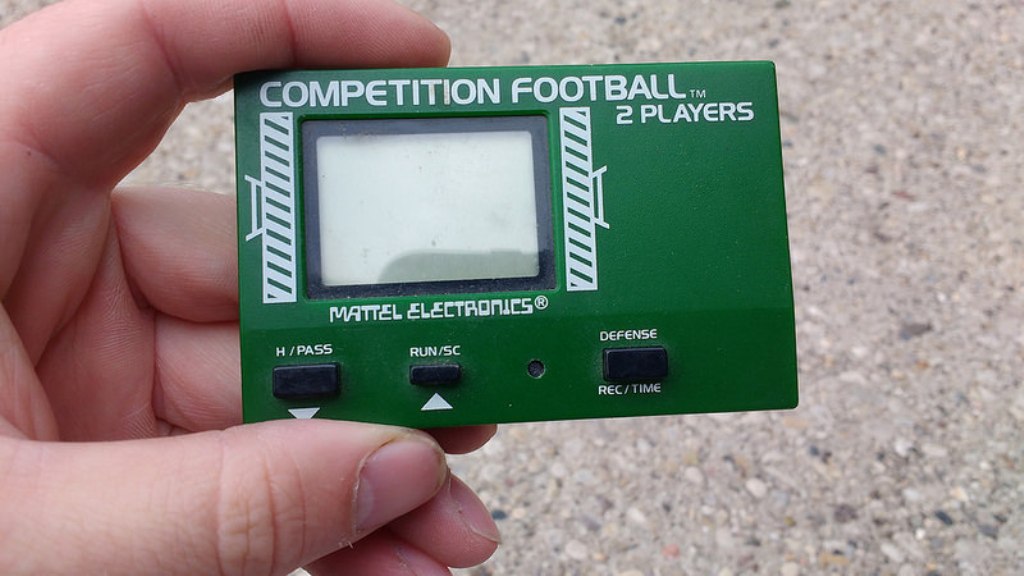 I was a few seconds from throwing it away. Someone showed up for our rummage sale looking for classic 80s handheld toys. He'd already bought all my Transformers (except Starscream and Silverstreak, which I'd pulled from my wife's grab-bag). He was looking for more, specifically the handheld toys I'd stuffed in a garbage bag the day before, and after doing a little research, I can see why he asked. Based on eBay prices, my handheld games are worth a little something, so it's better to call my new contact than toss them into a landfill. The best item I have was also likely the most expensive: Mattel's Competition Football from 1982.

I can remember it like it was only a decade ago. Aunt Teri and Uncle Greg wanted to know what I wanted for my birthday, and they were probably sick of me being an ungrateful little punk when they picked out something I didn't want, so this time, they took me to the Walgreens on 77th and Capitol. This was back when Walgreens had a sweet little electronics section, even if it couldn't compete with Radio Shack or Toys R Us for total quantity. The fact was that I'd been to that Walgreens a number of times, always drooling over the tiny green piece of magic that was the Mattel Competition Football game. So small I could fit it in my pocket, yet so expensive that I would never ask for it. Even Santa would have been hard-pressed to deliver this game to me, but Uncle Greg must have been feeling quite generous on this day, because when he asked what I really wanted, I told him, and he bought it.

For the next few years, as most of my friends got their Ataris and eventually Nintendos, I played my Mattel Competition Football a lot. After digging it out of the garbage and popping in some new batteries today, I played it again, and I realized why it was such a marvel to me. It's the perfect size for a six year-old, yet it can still be used at six times that age. It's simple, yet there's variation. And I still can't get a first down on Level 4. When I looked the game up, I kept finding the Mattel Classic Football from 1978. I don't know much about that game, but I can't imagine it was better than what I had.

It's kind of weird, though, that someone showing up after the rummage sale was technically closed would ask about something I'd already thrown out, and now I'm sitting here contemplating NOT selling it because I want to keep it. Maybe it's because playing some of the old games that made us happy when we were young can still bring back some of the same emotions. I can even remember the guilt I felt when I finally got an Atari 2600 and buried the handhelds away in a box, eventually in the attic, then to a new attic, and then into the trash.

The good news is that this memory was rescued, and even if I sell it to someone who appeared to appreciate the games (or profit from selling them online) more than me, at least I had one more day remembering what it was like to turn six years old and get the coolest gift on the block.

In case you're wondering about value, I saw one Mattel Competition Football selling for $50 on eBay, meaning you might get $20 locally. I'll also list a few other items with going prices for used, not in box versions:

Actually, if I had the time and inclination, I'd be able to make as much money selling four games I'd thrown in the trash than we made in several days of our rummage sale. Sure, most of the junk I found in my attic was certainly junk, but I guess it pays to see if some of the junk might be interesting to someone else before tossing it out.

If you have a large collection of toys or other collectibles you'd like archived online, Passive Ninja Web Design can help you get the job done.