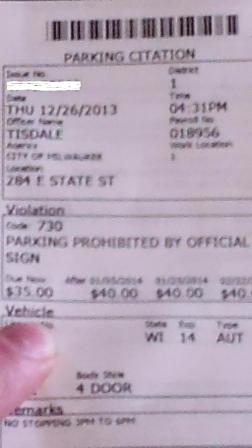 I've lived in Milwaukee my whole life. I've been parking in the city since I turned sixteen. I know most of the ins and outs of parking in the city. I know what I can generally get away with and what's not worth trying. I have made avoiding tickets a goal. However, most people that visit downtown or the east side do not understand the system as well as I, and they should be given a break.

Back when I used to get the Journal Sentinel, I'd read the opinion column quite often. One opinion that I saw quite often was the one written by a suburbanite vowing to never come back to the city because of a parking ticket. I'd often laugh it off and think to myself, "You shouldn't have parked that SUV in a no parking zone." The problem is, I've also been a victim of my own city's desire to keep the streets clear of... people who actually want to be there (and actually have money to spend while there).

I'll start off with my own neighborhood. We don't have a parking problem, but we have no parking signs from when there was a restaurant on the end of the block. Therefore, I've gotten nailed for parking my own car in front of my own house twice. This does stink, since I could pay less taxes and park wherever I want out in Sussex. I also got slapped with a Friday night ticket once, but that's because it had been legal years ago, so I hadn't realized the change. Either way, I've paid about $100 over the past several years just to park my own car in front of my house.

The bigger problem for most visitors, of course, is the parking downtown or on the east side. Double the time is usually a good rule of thumb near UWM, so I could usually attend two classes while parked in the one-hour parking and put in four hours in the two-hour parking zones. I could usually live with that. Snow emergency or 4" rules make it a bit more complicated, but that's not every day.

Downtown is where things get a bit dicey. You've got to pay for parking, and there are often many rules depending on when you're there. For example, Lisa parked in a spot that had no weekend or after 6pm restrictions, paid parking during the day, and no stopping from 3pm until 6pm weekdays. She was there by around 3:30 and received her ticket at 4pm. Sure, she broke the rules, but her navigator assured her it was fine, and there were others parked along the block. It was the day after Christmas, too, and that meant less traffic than normal. Was the extra lane really needed for that particular rush hour?

The debate about how wrong she was or how heartless the meter maid was is a bit besides the point. She spent money renting skates and would have bought hot cocoa if the lines weren't too long. She was appreciating the fact that we live ten minutes from downtown. She was helping the city to thrive. The problem is that she saw it as the city proving the suburban stereotype once again: parking is a hassle. And it is. Coupled with some of the worst public transportation in the world for a city its size, Milwaukee will continue to lose. Young people without kids might like living in the urban center, but established families with money to spend don't tend to live in the city.

I wish I had a great solution, but I have one that might work. Maybe the tourism office (if there is one) in Milwaukee could offer coupons to pay for one misused parking mistake per year per vehicle. Sure, someone would try to abuse it in some way, but for the rest of us, who only come to the city once in a while, we might show up more often if we knew we could get out of paying a ridiculous ticket in case we make a mistake. People could sign up with a valid email address and the city could send info about events, which those people might actually attend if they had confidence in their parking choices. Lisa would have mailed that in instead of the ticket, along with a part she might have to fill in telling city officials what she was doing downtown while spending our money. We could get extras for our out of town friends and encourage them to venture into the big, scary city.

Instead, I'm sure the city will pay thousands in upgrading parking meters and maybe developing some kind of app that tells people whether or not they're parked legally. These can be useful tools, but to create real good will between the city and its suburbs, something more inventive might be in order.