A Good Day to Play Baseball 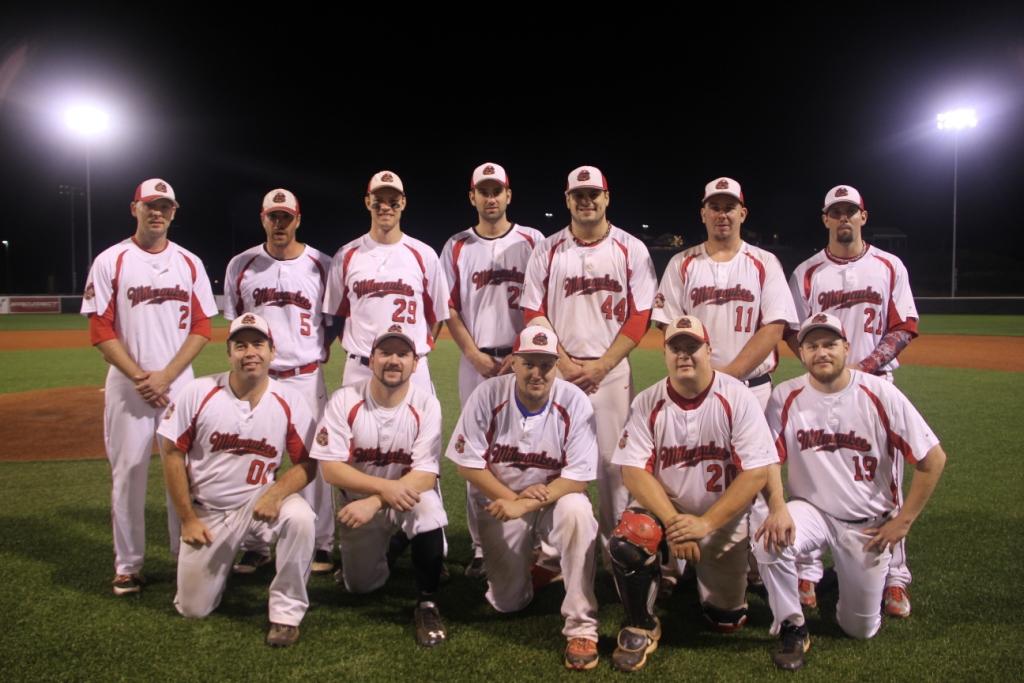 Today was a good day to be a baseball player. I play for the .500ish Milwaukee Beavers 28+ team. We only had eight players to start the game, but we were allowed to play, anyhow. With Bruce pitching, we stood a chance. However, Ski had to catch, even though he’s more of an outfielder. Steve had to play third, even though he only pitches for us. Kirk had to play second, even though he usually only plays a few innings a year as our coach. Adam had to play center and right, and I was in left field to start the game, even though I’d only played in the outfield a few times since high school. The reason for the eight men out was partially because the two 18+ teams that feed into our older, crustier team had playoff games, so many of our starters needed to prepare for a more important game, not wanting to play two on a 90-degree day. On top of that, Greg called and said he couldn’t make it, Andy had to work, Josh hasn’t been around much, Evan has a nasty injury, and so on. Kirk, at the start of the game, said, “Let’s do something stupid and win this one,” and we half-heartedly agreed, which is what we normally do with his motivational attempts. The thing is, there was still a game to be played, and the team we were playing had nine guys of similar talent to us, so we just had to play the game to find out what would happen.

I forgot to mention Adam G. He officially retired yesterday. He’d gotten hurt in a game earlier in the season, plus he’s on baby watch right now, so the time was right for him. Right before the game, I read his message to the guys on the team, wherein he talked about the memories, but not of the games themselves. Of course there was the game he won with a grand slam, but he didn’t talk about that. It was hanging out in the dugout and after the games. Having friends with similar interests. Maybe not friends you hang out with all the time, but ones who are still good people to meet and know. Better than Facebook friends from high school, anyhow. He was right, of course, but there are some games and moments that stand out, too. Individual and team.

I don’t want this to be a huge list of my own accomplishments over the years, but I was reminded of one when I stood in the outfield. First game of the season my senior year, and our normal center fielder was injured. During 8th hour, the coach (and my social studies teacher) asked who should play center. Having been a second baseman my entire life, I said I should start in center. For some reason, he let me. At some point, the other team’s best hitter drilled a shot into the fenceless center field at Dineen Park. I saw it off the bat and headed straight back, making a catch fairly similar to that Willie Mays one you might have seen, except I turned and jumped up to catch it. My best outfield moment ever, saving a sure big hit.

The problem in the game today was that I had already slightly pulled my hamstring in the top of the first inning, so I could barely walk off the field, let alone run after a potential big hit. I did catch one right at me, but that was where it had to be. Scott was running around the infield making plays and hitting the cover off the ball. Scott R. was making strong plays at first, and both Kirk and Steve were playing like guys who belonged at their respective positions. And we were winning the game. 6 to 1 at one point. The problem is that decent hitters will start getting to a pitcher after a few innings, so by the time our ninth player showed up in the 7th inning, it was a two-run game. I moved to third base, which has become my spot the last ten years or so, still using that same glove from senior year in high school (more than twenty years ago). Actually, I’d stopped using the glove this year, but Bruce suggested I try it again. It’s kind of falling apart, like me, but I was hoping that maybe it could be resurrected for this game.

Bottom of the ninth. I was reminded of the game when an opposing team in the County Open League attempted a suicide squeeze with me playing third. I ran in with the runner, the bunt was like a mini line drive, and I made a diving catch. Big play, and we finally beat the team with all the Tosa East guys. But that was over a decade ago, when I played for the Bandits. Then there was Fritz’s, then Long Wongs, and then The Beavers, most of it with Captain Kirk at the helm. Some of it with Adam G. hitting bombs. And lots of other guys. Mostly good guys. Most of the time.

The first man to bat in the ninth had pulled it earlier in the game. I know the rule about extra bases late in a game, so I moved a step closer to the line. Crack! Right down the line. Step and dive. I felt it hit the glove, but I knew it wasn’t secure. But there it was, right next to the glove. Pick it up and throw. One out. It was the kind of play I’ve sometimes only made once in a season. I tend to dive a lot, but I don’t always come up with the ball, and the throw is often what gets me. A few more batters. Two reach on hits. One makes the second out. Maybe the bases were loaded. Maybe two on, but a hit ties it. Crack! Another fiery ground ball down the line. Another step and dive. This time it’s in the glove. Only play is at first. Another good throw into a hard wind. Game over.

It was a little like when I hit two home runs in one game back in the County Open (the only guy to do it that year). I may never hit another home run, in all honesty, but two plays like that in a season would be good. Two in a game rarely happens. Two in the same inning, though, is something to remember. When I told my wife about it and how cool it was to get all the high fives and several fans cheering, she said, “Really? Oh, I should pluck that hair growing out of your ear.”

In all honesty, without Bruce pitching such a good game and all the other guys making all the other plays, I had no chance to save the game. And if I’d done better than 1 for 5 at the plate or our other eight guys had been there, the game would not have hinged on those plays. That’s the way it works, though, and had both those balls been doubles, we lose, and the other team has the memories to share with their own understanding wives. It works better when we all understand each other, though, which is what Adam G. was saying in his retirement message. He’s right. Next year, if there is one for me, when I boot two balls at third in an inning (and I’ve done that... even in this year's league championship game), someone will suggest I try my other newer glove again, or get my glove fixed, or maybe hang up the cleats. And they’ll likely be right, mostly. I’ve been playing this whole season with headaches and dizziness that has yet to be cured by torturous physical therapy. I don’t see the ball well under the lights. When I dive, it hurts. Actually, it’s sometimes more like falling down and hoping for the best. Just another way baseball is like life (or that life is like baseball). 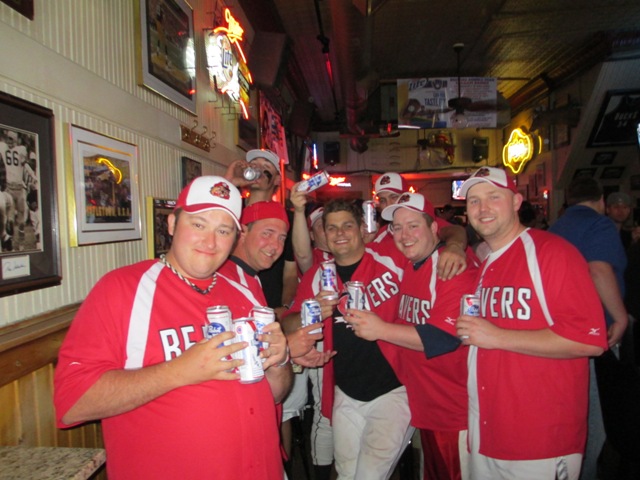 Milwaukee Beavers hanging out after a game at Leff's. 2010s 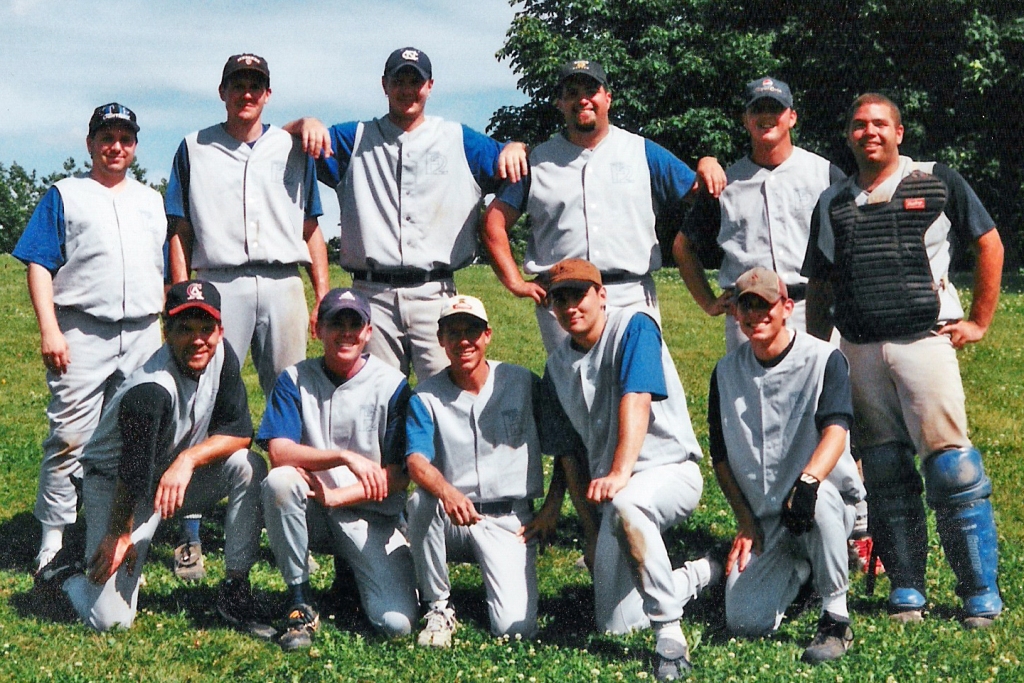 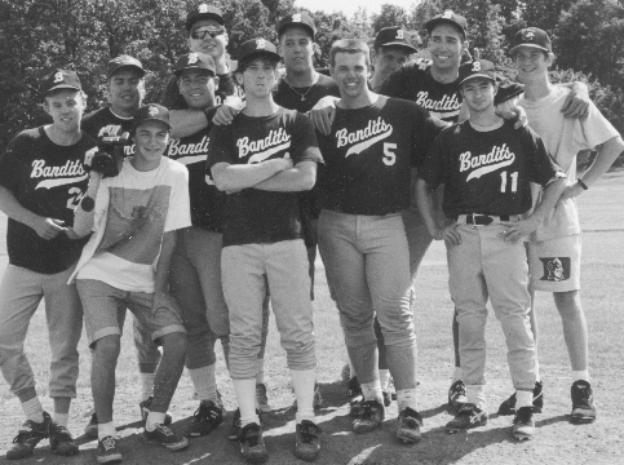 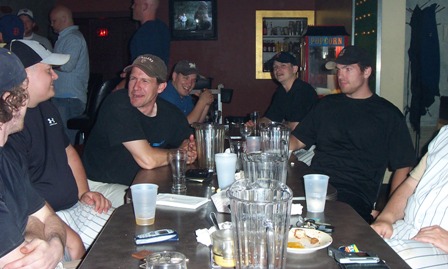