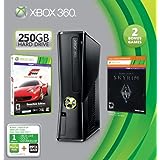 I wasn't sold on Xbox really being the gaming system that Lisa would approve of. I couldn't believe that a little sensor could tell whether or not I was really working hard in front of it. After about a week of owning an Xbox 360 4GB with Kinect Holiday Value Bundle

, however, I'm pretty convinced that it can tell how hard I'm working, and it's not exactly Wiizy.

Speaking of the Wii, I did use the first generation Wii at a friend's house to play sports games. It was borderline fun, but not reminiscent of actually doing the sports live, so not much of a workout. I don't know if it's going to work for Lisa. However, these are my initial impressions based on the games I do have.

: I like it. Bowling is kind of dumb. Ping pong is awesome, and so is boxing, except for the fact that you compete against the same people all the time. Soccer is blah, as is beach volleyball. If you want to punch the hell out of your TV, however, the boxing will do it for you. I'm sure Kinect Sports is supposed to be more of a compilation of what the system can do rather than the greatest version of any one of the games represented, so I guess I understand why all of the games are kind of lacking. However, I am moving around when I play and it is a decent workout with purpose.

: Made for little kids, this game is mostly walking around the park until you find something. The games inside have not been physically challenging, but you do have to move. The kids will like it once they get used to the navigation. Flying around with Peter Pan was visually cool, but not an actual arm workout.

Sesame Street: Once Upon A Monster

: Jumping into each story is harder than it needs to be, and the games are a little redundant, but the kids always want to play it and say they love it. Not a huge workout by any means, but it gets kids involved in the stories, and that is totally cool to them. How many times will they play it? I don't know. How long will Sesame Street be magical? Helena's six and loves it, so another couple of years for James, at least.

: The adventures are passably fun, but this is another game that seems to want to show the player how many different positions can be mapped by the Kinect rather than the most fun game possible. Then again, it's a game for the whole family, so you're probably limited with how difficult or scary to make the adventures. Not going to sweat too much, unless I've missed the real workout game.

: Both of my kids love this game. I can't speak to whether JD3 was better, as some of the Amazon reviewers say, but I can say that most of the music is annoying, which means the kids totally love it, and each song is a real three-minute workout. However, when I played against my kids, they were both getting all the moves right, but I was getting the bigger score, which I attribute to either an inability of the Kinect to see little kids' bodies well, or because they came in a fraction of a second after the on-screen dancer. Since the kids are roughly the same size, the whole sensor not picking up their movements is kind of negated if they play each other, so it ends up being a pretty fun game.

: I know this is the game everyone is talking about for exercise right now (1-13), so I will be giving a synopsis after we use it for a while. The biggest concern we have with this game is location because of the nice rug in the living room. It's not really feasible to move the rug each time, but I'm not sure it will stay underfoot too well if the game requires quick movement... I have used the game twice now. It makes you work, that's for sure. I was rated a little over 50 on its two ranking scales, and I assume that dictates difficulty of workout. My 35 minute strength training workout made my body sweaty and strained. In fact, I refused to do the cool down exercises because I wanted to just lie on the floor. The only problem I had was following the form correctly, especially for the ones where you're on the ground, facing the couch rather than the TV. However, even on the ones I got wrong and the game didn't count, I was working hard.