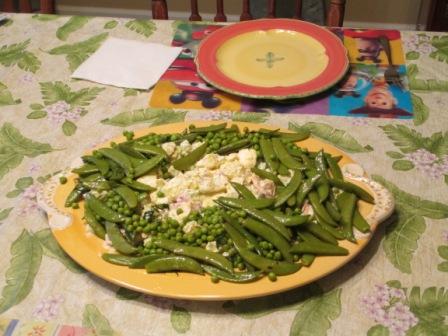 Well, we’re in the dog days of summer, so a cold seafood salad sounded terrific when I happened upon this recipe in my May issue of Good Housekeeping (I don’t know about you, but I’m forever backlogged on my magazine reading, so I’m rarely reading the current issue). The ingredients this recipe calls for were fairly basic, so no specialty stores required and thankfully the only major leftover that will be hard to use up is the fresh dill (so I hung it upside down to dry out for future recipes).

From looking at the recipe photo, I assumed this would be sort of like potato salad with shrimp thrown in. However, I wasn’t sure if this was supposed to be a hot recipe or a cold one. Normally I think of potato salad as cold (unless it’s the German variety), but in this recipe they tell you to put the HOT potatoes into the dressing and other ingredients, and it appears that the peas are supposed to be drained but not cooled. On the other hand, the shrimp is supposed to be run under cold water. The eggs could go either way – I used my Krups egg cooker (a fabulous invention, I must say) to hard-boil our eggs but since the recipe didn’t say to make them ahead and refrigerate them to a cold temperature, ours ended up being still-warm.  I made seven eggs instead of the twelve the recipe called for since our cooker only makes up to seven – I realized later that this meant more sauce and less substance to spread it over, so I think in future I’d plan for two batches of eggs or make more potatoes to make up the difference. When I put the shrimp salad on the platter and then spread the peas around the outskirts per recipe directions, we ended up with a lot of peas covering most of the shrimp salad (the opposite of the magazine photo), and a rather lukewarm dinner. I thought it tasted much better all mixed together as cold leftovers the next night.

How it went over: my husband is not a huge fan of peas, so those were left on his plate. He thought it would be better to serve the peas completely separate from the potato and egg salad part, and the shrimp apart from that. (Gee, wonder why my kids always want everything on their plates separated…). That hint should tell you that my kids (ages 4 and 5) didn’t eat this very well – my son ate the hard-boiled eggs, and a few shrimp and potatoes. My daughter ate one egg and declared she didn’t like the sauce (but getting either of them to eat any sort of combo food covered in sauce is a tough sell). We happened to have my husband’s cousin Jason over for dinner too, and it turned out he is not a fan of potato salad and he doesn’t like frozen peas, so this wasn’t a major winner in his book. He does like snap peas, hardboiled eggs, and shrimp, but not in potato-salady sauce. He required a second dinner of chicken tenders while out later that evening. For flavor, my husband and I thought it was good, a very classic, what-you’d-expect potato salad recipe. I was relieved that the dill wasn’t too overpowering. For all the work involved in concocting it though, and given what a huge platter of salad it made, I think I’ll save this one for a party for adults rather than a dinner for a family of four.

What I served it with: cantaloupe and French bread I had made in the bread maker, with butter, jelly, peanut butter (my daughter’s favorite), and apple butter for topping options. My kids love their carbs and this gave them a salad-alternative to fill up on. There was also a fancier fruit salad made with hemp seeds, but I was the only family member who could be prevailed upon to eat that…

A few notes to take into account if you attempt this recipe:

The chef tried to simplify this recipe by having you use the same 4-qt. saucepan for the eggs and potatoes. I say, get an egg cooker (I use Krups’ Egg Express) and have the eggs cooking while you boil the potatoes. Side note: egg cookers are awesome, and not just for this recipe! I love throwing two eggs in the poaching cups for a fast breakfast for my kids, and it hard boils up to 7 eggs, which we use for snacks or egg salad sandwiches.

Skip the chopping and just tear the dill fronds off the stems – simple and easy and just as quick (maybe quicker) than chopping with a knife. Another idea – use a kitchen shears to snip snip – I love Chicago Cutlery ones.

Rather than boiling the peas, I steamed them in my steam-valved stainless saucepan – keeps the nutrients in and I didn’t have to wait for the water to boil.

I used plain non-fat Oikos Greek yogurt for a creamy, not runny, consistency. Greek yogurt is a fantastic mayo/sour cream substitute. Another brand I really love is Fage.

Tails off! The recipe calls for shelled and deveined shrimp – being fairly new to cooking seafood, I bought fully cooked shrimp to be on the safe side – however, the tails were still intact. I cooked them that way, but when I served the salad I realized I should have removed them ahead of time, as it was awkward to pull them off once they were covered in dressing. Will have to research that one to see whether shelling refers to tails and whether to do that before or after cooking (my hunch is that it’d be easier to do post-cooking).